Emotionally Attached to my Didy 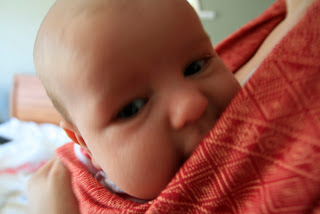 This is the story of how I developed an emotional attachment, akin to that of a child to a blanky, to my Didymos Silk Indio woven wrap sling. I call her (yes, it's a she) “Didy” and she holds a special place in my heart.

Of all the slings I've tried, Didy is my absolute favourite. Aside from being beautiful, tactile, and totally practical for a warm baby in summer, Didy holds a lot of meaning for me as a solution to many of my baby Holly's initial sleeping problems.

Holly was a colicky newborn who found evening sleeping and feeding really difficult. Every evening from around 5 she would start crying, and it wouldn't stop until late (which I'm sure sounds familiar to many new parents). Most of the time she wouldn't take to the breast so feeding to sleep wasn't an option, much to my distress. More often than not we would rock her to sleep, singing while she cried in our arms until she tuckered herself out. It was really hard. Nothing we tried was working, and nothing had prepared me for the anguish I felt at being powerless to stop my baby crying.

Wrap slings had appealed to me since I had seen my dear friend Emma wearing her first born in one. What I liked most about them initially was the convenience and portability. Emma also looked stylish, relaxed and somewhat like a supermum, and baby Leith was snug and contented. So, with Emma's guidance, we invested in two lovely stretchy wrap slings before Holly was born.

We had of course heard about helping your baby to sleep using a sling, but for some reason in those early, sleep deprived weeks, we primarily used the slings we had for taking Holly out walking or shopping. Eventually the light went on, and tried them as a sleep solution, but when we did she was already overtired and would cry even louder as we put her in. We persisted despite those cries because, once she was snug in her sling, Holly would fall asleep much quicker than the rocking method, and would sleep soundly against either mummy or daddy for a reasonable length of time.

Once we made the conscious decision to use slings as a sleep tool, we were much better at putting Holly in the sling before she became really overtired, and eventually she stopped protesting altogether. Often it was only a 100m walk up the road and back that put Holly off to sleep.

We were determined to make a go of it, and the more we looked into slings, the more benefits we could see for Holly. She was such a spilly baby - before, after, in between and during feeds - and seemed most comfortable in an upright position. Of course it meant washing the sling quite often!

The reason why we went for stretchy wraps over woven ones was that we were reluctant to fork out the big bucks on a woven sling without trying the sling idea out first. The stretchy wraps were good for Holly as a newborn, but as she started to pack on the weight, the wraps would sag a little and constantly need retightening. She would also get way too hot, and seemed to need a much lighter fabric. For this reason, Didy was absolutely perfect for our needs.

We also tried a number of different carries before settling on the front wrap cross carry as a preference. All three of us preferred this carry because Holly was completely upright (as opposed to a cradle carry) which helped with the spilliness, and it was the most supportive of all carries for my back.

Once we'd bought Didy there was no turning back. I also stopped using the stroller, taking Holly out for walks in the sling instead. Having Holly sleep in the sling made it so easy to get out of the house, jump on a bus to town, catch up with friends, or do whatever I needed to at whatever time. It has meant that Holly is a completely portable baby – she'll sleep wherever as long as there's a sling handy. Even evening sleeps were blissful, with Daddy putting Holly to sleep in the sling until we adults were ready for bed (then a quick transfer and a dream time feed did the trick). Things really started to come together sleep-wise when Didy arrived. Like a beautiful, woven kind of magic. 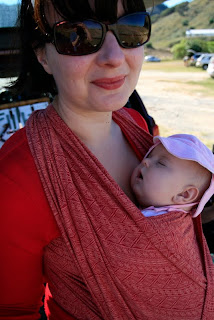 Daddy still loves wearing his sleeping daughter. I know it has assisted in their bonding – each sleep is an extended hug. For myself, even when I'm having a bad day, and feel cranky with Holly for whatever reason, wearing her blissfully sleeping in the sling lets me reconnect with her every time.

While it is still completely usable for our bonnie baby, Didy's fabric blend and weave means that it isn't quite as supportive as a 100% cotton wrap sling or a soft structured carrier. So now we use the Manduca or the Neobulle sling. But Didy still remains our most precious sling, because she was a real life saver in our time of need. Didy helped with Holly's sleeping difficulties, her spilling, and I am totally convinced that wearing Holly so much in the first six months of her life helped strengthen that special bond between us. Didy has been fundamental in Holly's development from baby into toddler, and I give Didy much of the credit for the confident, smiley and happy little 12 month old that Holly is today.